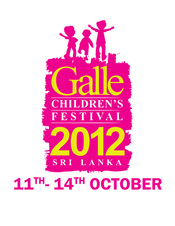 The 2012 Galle Children's Festival was expanded in response to the fantastic feedback and suggestions shared by the 2011 participants.

Opening Parade, Ceremony and Puppet Show
The Galle Children’s Festival 2012 officially opened on Thursday 11th October 2012 with an opening parade which showcased the talents of local young people. School bands and dance groups performed in this exciting parade which wound its way through the historic Galle Fort.

Our Chief Guest Honorable Chandima Rasaputhra, Minister of Provincial Education (Southern Province) officially opened the Festival and spoke of the importance of events such as the Galle Children’s Festival to foster the participation of local school students.

Students and their families were then treated to a traditional Puppet Performance by the Saranga Ambalangoda Puppet Group.


Schools' Day
To ensure schools are able to fully participate, an exclusive ‘School’s Day’ was held on Friday 12th October; enabling students and their supervising teachers a chance to take part in a very special program designed especially with local schools in mind.  Over 1100 children from 45 local schools were treated to their very own day of exciting workshops and activities. This event was held at Children’s Hope in Hadediwatta, Habaraduwa, Galle

The following workshops were run on Schools’ Day:

5.    English Through Storytelling (BC)

9.    Illustrate Your Own Stories

12.  Art and Craft with British Council

14.  Impressions of the Festival

23.  My World Without Water

30.  Adventures in the Wild with Endangered Animals

35.  Essay Writing is all about Creativity


Community Day
A full day of activities was also held on Saturday 13th October in the Law Court Square, Galle Fort which provided the children of Galle and surrounding areas with the opportunity to participate in the many activities on offer. The 2012 Festival's Community Day gave over 1000 children from around Sri Lanka the opportunity to come and participate in a full day of activities and workshops. This special event was held in the Law Court Square, Galle Fort as well as the Maritime Museum and Hall De Galle. Over 1000 children participated in the following workshops on Community Day:

3.    A Great Essay Is All About Creativity

15.  English Through Storytelling (BC)

17.  Illustrate Your Own Stories

18.  Art and Craft with British Council

20.  Impressions of the Festival

30.  Adventures in the Wild with Endangered Animals


GCF Day Out
‘GCF Day Out’ was held on the final day of the Festival, Sunday 14th October and gave local families the special chance to spend the day together on a range of exciting outings. These included the Day Out with the Sri Lanka Navy, Pool Party at the Lighthouse Community Pool, Eco-Trip to local rainforest and tea estate Samakanda, a visit to the Martin Wickramasinghe Museum and a special bike ride for children and their parents around the historical Galle Fort.

Over 700 local children and their families had the unique opportunity to participate in a range of fun family outings on the final day of the Galle Children’s Festival. Families met at the Samanala Ground before buses took them on these fun outings.